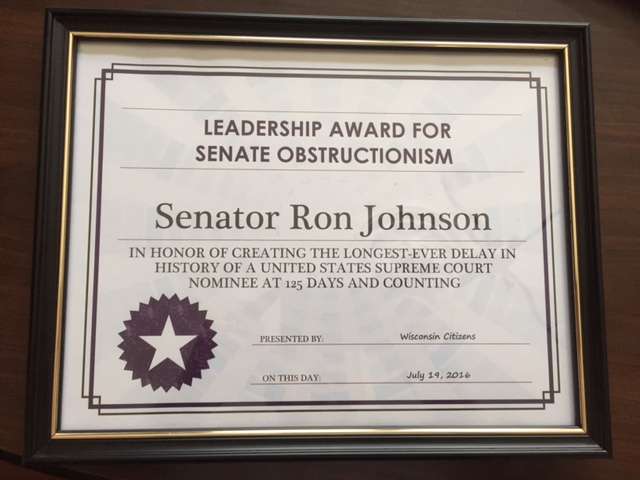 A group of citizens visited U.S. Senator Ron Johnson’s Milwaukee district office today. The group presented him with an award for his unprecedented obstructionism.

In addition, League of Conservation Voters dropped off more than 150 hand written letters and petitions calling on Johnson to do his job.

Sen. Johnson and other Senate Republicans have created the longest-ever delay in giving a Supreme Court nominee a vote or a hearing. July 19 marks 125 days since President Obama nominated Chief Judge Merrick Garland to fill the empty Supreme Court seat. Chief Judge Merrick Garland is a consensus nominee with unprecedented bipartisan support and more judicial experience than any nominee in history.

Rather than give Judge Garland a fair hearing and vote, Republicans like Sen. Johnson are holding the seat for a Trump nominee, the most divisive Presidential candidate in history.

Many Senate Republicans have refused to say if they support Trump for President, some won’t even appear at the Republican National Convention in Cleveland, but tonight, Sen. Johnson is scheduled to speak at the convention in support of Donald Trump.