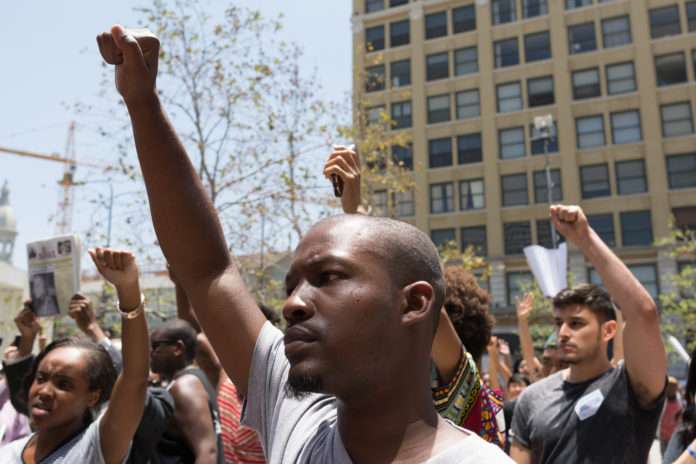 The tension between Milwaukee’s Northside residents in Sherman Park, a predominately Black neighborhood and the police has grown over the years. Teens in the neighborhood have grown restless in recent weeks, and those tensions spilled over Saturday night after a police officer shot an armed suspect.

Angry demonstrators clashed with police in Milwaukee on Saturday night after a police officer fatally shot a man who had a gun during a foot chase that turned deadly.

The violence erupted on the city’s predominantly black north side, an area beset with a history of violence and distrust between police and the community.

During a midnight news conference, Mayor Tom Barrett stood beside city leaders to plead for an end to the chaos that had been unfolding for hours on city streets, according to the Associated Press.

“We have to have calm,” Barrett said. “There are a lot of really good people who live in this neighborhood.”

“I commend the citizens who volunteered in clean-up efforts this morning,” the statement said. “This act of selfless caring sets a powerful example for Milwaukee’s youth and the entire community. I join Milwaukee’s leaders and citizens in calling for continued peace and prayer.”

“It is also important for citizens to know that Wisconsin is the first state in the nation to have a law requiring an independent investigation anytime there is a shooting by a law enforcement officer that leads to a death,” the statement added.

At a press conference Sunday afternoon, Barrett said a still photo extracted from the officer’s body camera footage “demonstrates without question” that the suspect had a gun in his hand.