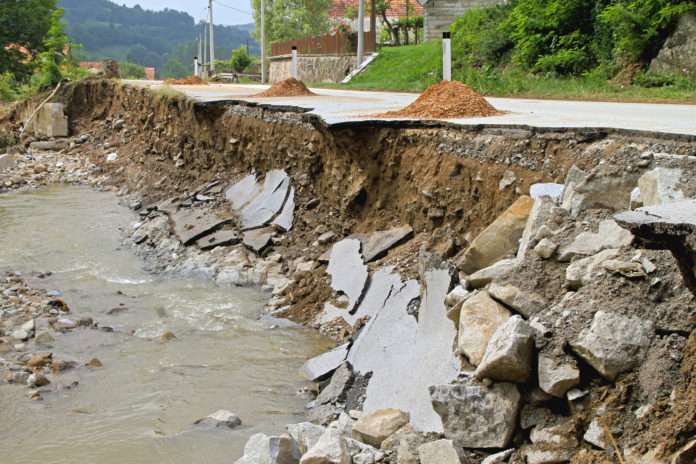 Environmentalists, residents, local elected officials and Sen. Baldwin toured the effected areas of the bluff erosion in Mount Pleasant. The erosion is being toured because Mount Pleasant officials are awaiting on word for federal funds to help the Lake Park neighborhood, businesses and homeowners in the path of the erosion.

Temporary measures to stabilize the bluff in the Lake Park neighborhood have begun while officials, including U.S. Sen. Tammy Baldwin, await word on federal funding.

Residents and local officials met Tuesday with Baldwin, who toured the area along the lake east of Sheridan Road. The neighborhood has been hit hard by severe bluff erosion, which has threatened up to 20 homes in Mount Pleasant and others throughout the region, as well public utilities and infrastructure.

“It’s amazing what Mother Nature’s capable of and sort of shocking to see the erosion that’s occurred very recently,” Baldwin, D-Wis., told reporters. “I’m seeing the enormity of it, the threat that still exists because there’s no reason to believe it’s come to a stop.”

Baldwin and other state and federal officials have asked the U.S. Army Corps of Engineers for help through the agency’s Section 14 emergency authority, which would allow the corps to expedite construction of bluff protection measures.

The first step is getting approval for a $100,000 study, said Robert Stanick, chief of operations for the Lake Michigan Army Corps office. It would then compete for funding with other projects. If successful, up to $5 million could be awarded for the project, Stanick said, adding that local government would pick up 35 percent of the cost.

The process will likely begin this fall when officials begin prioritizing projects. But it will be some time before any funding determination is made.

Many years ago, the Army Corps undertook emergency bluff stabilization measures near the former Lake Park fire station, 3809 Sheridan Road. The time from contacting the corps to construction was about three years, Stanick said.