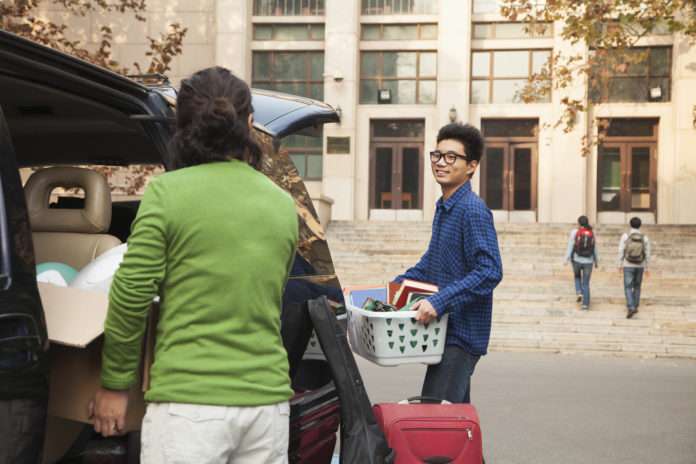 Recently several female students at UW-LaCrosse were appauled on move-in day when male classmates stood on on a balcony with a hand-written banner that reads: “free cream pies with valid freshmen ID.”

Many female students immediately took offense to the sign, and now UW-LaCrosse has found itself in the middle of a campus rape culture conversation that’s spreading throughout the internet.

The males who are pictured holding the sign, claim that it was a joke and intended to be funny, but thousands of others – on and off campus, aren’t laughing.

One writer at The Racquet.org shares a viewpoint about the situation:

Rape culture is the normalization of sexual aggression and violence against women. When these concepts are normalized, it can be hard for some members of society to recognize acts, words or behaviors as perpetuating rape culture. Thus is the situation the UWL student body has found itself in, as a group of male students created a banner that read: “Free cream pies with valid freshman ID.”

Those who made the sign stand by their intentions of the sign being an attempt at humor and no apologies have been given, despite overwhelming criticism (and I mean 1700+ shares on Facebook overwhelming). Many  students who have seen the banner reportedly felt unsafe, targeted, and angry that such a sign was created by fellow students and posted outside of an apartment building near campus. Meanwhile, those who stood by the signs held up their drinks and often yelled down to those who walked past. With reactions like these, should the “it was a joke” excuse be tolerated?

The answer is absolutely not. I consider myself to have a pretty neat sense of humor and there’s no way I would ever find this disgusting stunt funny. Believe it or not, sexual harassment has never really made me laugh. Shocking, I know. Those who made the sign or were supportive of the sign also argued that the sign did not perpetuate rape culture at all. In addition, they had super credible arguments in the comments section on Facebook like “feminism is cancer.” Some of these arguments have since been deleted, for some odd reason.

For more on this unfolding story, visit The Racquet.org.