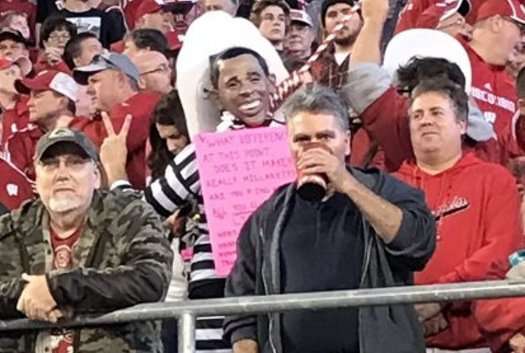 A fan attended Saturday’s UW-Madison Badger football game with a mask of President Obama and a noose around his neck. He wasn’t ejected from the game but instead was asked to remove the noose. He complied with campus police and eventually left the game.

The University Chancellor Rebecca Blank, issued a statement that upheld the fan goers constitutional right of free speech, saying in part, “I believe our university must resist the desire to outlaw forms of speech and political dissent with which we disagree.”

A fan in a mask of President Barack Obama with a noose around their neck at the Badger’s football game against Nebraska Saturday night sparked national outrage.

The incident comes at a time when students, faculty and staff are questioning the University of Wisconsin’s campus climate, after what Chancellor Rebecca Blank referred to as “ugly incidents” last Spring.

When UW police and athletic officials were alerted about the fan via Twitter and text messages, security immediately asked the fan to remove the noose around his neck. The fan complied and was not ejected from the game, according to UW police.

University Chancellor Rebecca Blank issued a statement Sunday in response to the incident. She said though the costume was offensive, the university has a responsibility to foster a community of freedom of expression.

For more on this story, visit Badger Herald.