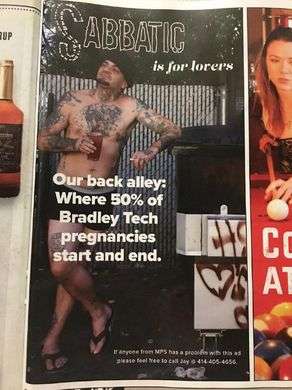 Community residents are up in arms after Milwaukee tavern Sabbatic ran an horrific advertisement in a local publication offending high school students and their families.

The ad, published in Alcoholmanac, a nightlife and culture magazine, reads, “Our back alley: Where 50% of Bradley Tech pregnancies start and end.”

The bar is located in the same Walker’s Point neighborhood as Bradley Tech High School, which serves a population of children, the majority of whom live in poverty and are of color.

Despite immediate backlash on social media, the bar’s owner didn’t back down from his offensive stance. He first claimed students were responsible for crime around his bar – which the police refuted. Then he said his complaints were about MPS’ central administration, although the ad attacks students, not bureaucrats.

On social media, Stamates continued to speak unfavorably about the Milwaukee Public Schools administration and its students.

He said, “My apologies. I apologize to my staff, I never want to a take a dollar from you. I apologize to the good kids at Bradley Tech, they got caught in the middle of a tasteless joke. I apologize to friends and family, you should never have to repudiate or defend me. My heart goes out to the good MPS teachers burdened with a deeply challenging task, doing their best with limited resources. My frustration remains for the MPS administration.”

The owners of Alcoholmanac, Brian P. West and Angela J. West, released an official statement, in part saying, “Let us be clear: the ad, its content, its message…everything is solely the opinion of the bar that placed it. We do not agree with the content. Still, we allowed this ad to be placed in a magazine that you, our readers (and those previously unfamiliar with us alike) can see it and may become offended. In this way, we are accomplices, and for that, we apologize.” Read the full statement here.

It’s not yet clear if Stamates and MPS officials will have a meeting.