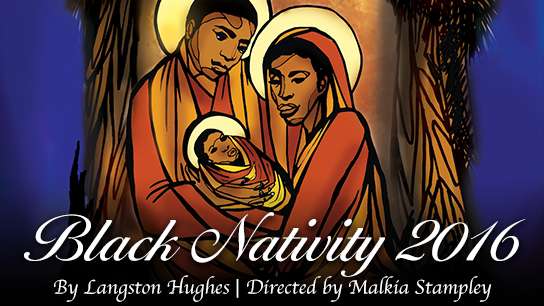 Born into a very musical family, Malkia Stampley has taken her talents for acting and singing all over the world. She says that her mom pushed the arts on to her and her older brother, Nathaniel.

“This is in my DNA,” Stampley said.

Stampley attended Marquette University to study theater. She’s lived and worked in cities like Chicago and New York, but four years ago, while living in New York with her husband and three children, decided she needed a change.

“I wanted my kids to have a backyard, I wanted to be closer to my parents,” she said.

It was then the Malkia and her husband Chike Johnson, decided it was time to move back to Milwaukee.

“I married an actor so our home-life is fun; we’ve learned to adapt, because things in our industry change in an instant.” Stampley’s husband is currently in the cast of A Christmas Carol at The Pabst through December 24.

“Coming back to Milwaukee has opened up more doors for me. I gained the confidence to come back, start a theater company and work with other great theaters across Wisconsin,” she added.

Stampley co-founded the Bronzeville Arts Ensemble with other Milwaukee natives. The Bronzeville Arts Ensemble was started about 3 years ago and is in residence at the Milwaukee Repertory Theater. Stampley serves as the artistic director there.”Milwaukee is a complicated city for Black people and for Black artists. But it’s a wide open field. You have to have the passion, confidence and determination…I didn’t realized how determined I was, there are so many talented people here.”

Stampley’s directorial debut, Black Nativity by Langston Hughes opens December 1 at the Marcus Center. “Being able to direct Black Nativity is such a great experience. It’s such a large project and we’re stretching ourselves.”

She added, “It’s scary, but there is no greater joy that I have right now then giving cast members a chance to shine their light.”

Black Nativity was at the Marcus Center last year, but this year, the audience can expect something a little different.

“Black Nativity takes place in today’s times, in a city like Milwaukee. We’ve modernized a lot of the traditional spirituals, it has more of an edgy spin.”

Returning cast member, Syd Robinson said, “Black Nativity is amazing! I’m honored to be back. Last year we sold out.”

Performances run for two weeks and tickets are $10. The Marcus Center added two special Community Nights to the performance schedule in order to engage students and non-profit groups in deep conversations that surround the themes of the play.

On these special Community Nights, November 30 and December 7, audience members will have the opportunity to engage in conversations with the actors.

On December 3 after the 2pm performance, a special panel discussion will be held with community leaders like Rev. Tony Phillips of St. Ann’s, Jarrett English from the ACLU, Monique Liston, educator and Ph.D. candidate at the University of Wisconsin-Milwaukee.

Tickets for Black Nativity can be purchased online or at the Marcus Center box office.