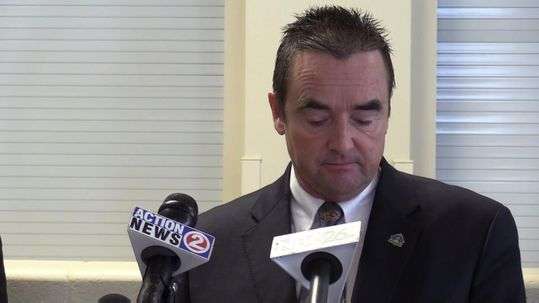 Judge Mitchell J. Metropulos sentenced Green Bay Mayor Jim Schmitt on Monday to $4,000 in fines and 40 hours of community service for accepting over $11,000 in illegal campaign contributions during his re-election campaign.

Metropulos said, “You decided you wanted this money, and deposited a number of checks that were over the limit that you shouldn’t have taken in and you reallocated them so you could keep them. Those are serious allegations. It shows there was intent to deceive the campaign finance observers and collectors of the records.”

According to the Green Bay Press-Gazette:

As part of a plea bargain, those counts were reduced from felonies.

“Your honor, I’m really sorry. I am. I apologize to the court, my family, especially to the citizens of Green Bay. This will never happen again. I’m sorry. I’m responsible,” Schmitt said in court.

Later, in a 50-minute news conference, Schmitt told reporters the violations have no bearing on his ability to serve as mayor, and he won’t resign from public office.

Some of his critics have called on him to either step down or face a hearing to forcibly remove him.

“People are going to think what they want. I can only apologize so many times. It’s been two years of apologizing,” Schmitt said. “I hope the public sees I’m human. I made a mistake. I rushed something, but I love this city and that is going to continue.”

Schmitt went on to say that he may not seek re-election when his term ends in 2019 because he wants to focus more on his family.

For more on the Mayor’s sentencing, visit Green Bay Press-Gazette.