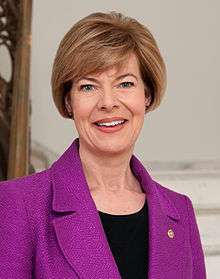 Riding on the coattails of Donald Trump winning the state and Republican Sen. Ron Johnson, winning his bid for re-election, Republicans are eyeing potential Democratic stronghold seats.  U.S. Sen. Tammy Baldwin is one target for Republicans in 2018.

The Milwaukee Journal Sentinel has been told that there at least five candidates who exploring taking on Baldwin.

Two other big names have been swirling around GOP political circles.

Lt. Gov. Rebecca Kleefisch’s name has also been mentioned as a possible runner, along with state Rep. Dale Kooyenga of Brookfield.

“My focus is getting a laundry list of items done in this next legislative session,” Kooyenga said.

Mark Graul, a political operative, said: “The names swirling around are very strong candidates,” but he cautions that it is next to impossible to predict the 2018 political landscape.

“Right now, the most important thing for Republicans in Washington is to deliver on the mandate that they received from voters and that will tell a lot about the kind of success they’ll have in a general election,” Graul said.

Fitzgerald said he wants to avoid what occurred in 2012 when his brother Jeff, then the Assembly speaker, was part of a contentious four-way GOP primary. Former Gov. Tommy Thompson had to spend precious time and money to win the primary. He then fell to Baldwin in the general election.

“There was a real opportunity last time that just kind of slipped away,” Fitzgerald said.

The potential candidate who everyone appears to be waiting on is Duffy, who raised his profile this year when he became an early backer of Trump. First elected to Congress in 2010, he represents the district held for years by Democrat Dave Obey.

For more on the 2018 political races, visit Milwaukee Journal Sentinel.