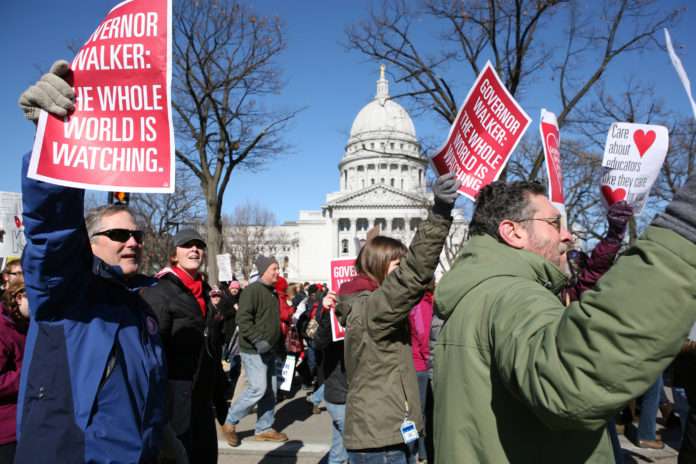 Gov. Walker gave his seventh State of the State speech today to the joint legislature. During the thirty-minute speech, the Governor repeated the phrase, “We are working and winning for Wisconsin” as he went on to falsely tout the “wins” for the state over the past six years.

He said our state is strong, citing, “unemployment levels are the lowest in more than 15 years. And the percentage of people working in Wisconsin is one of the highest in any state in the country.”

He discussed few details about the 2017 – 2019 budget proposal, and didn’t hint about a possible bid for re-election. But the Governor did promise to not raise taxes, saying, “I will keep my promise I made to the voters in the last election. Whether you agree with me or not, I hope you can respect that I will keep my work. We were not sent here by the people of Wisconsin to raise taxes.”

We are working and winning for Wisconsin was the message that Gov. Walker repeated when he discussed public schools, agriculture, college readiness and tuition, welfare reform, jobs and transportation infrastructure, but too many Wisconsinites, “working and winning” just doesn’t ring true.

The response from Assembly Democratic Minority Leader Rep. Peter Barca echoed those sentiments. “The governor has bragged about his tax policies, while neglecting to mention that his cuts have largely benefited the wealthy of our state. Not to mention, many local schools have had to pass referendums to make up for state aid shortfall—this unfairly places the tax burden on the backs of Wisconsin families and small businesses who are struggling to make ends meet.”

With his party being in the minority, Barca vowed, “Democrats in the Assembly will continue to put forward bold ideas that have been proven effective in order to fund our schools, fix our roads and rebuild the middle class. This is why the majority of Wisconsin believes we are on the wrong track. They deserve better.”