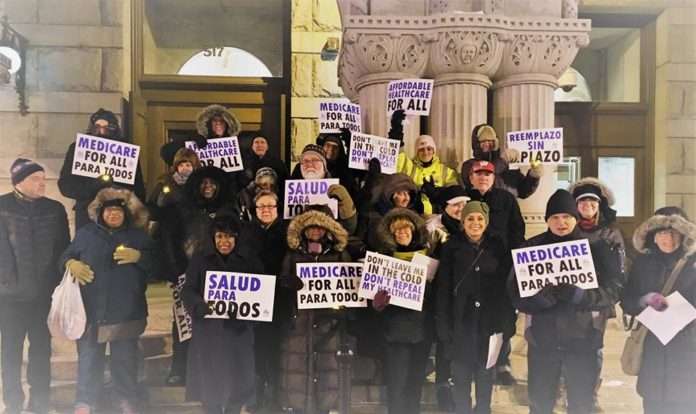 Across the state on Sunday, supporters gathered to save the Affordable Care Act. In Milwaukee, supporters where joined by Sen. Tammy Baldwin (D-Wis) and U.S. Rep. Gwen Moore (D-Wis.). The statewide rallies, where of many held throughout the nation to protest Congressional Republicans attempts to repeal and replace the 2010 health care law.

“The people of Wisconsin did not send me to Washington to take their health care away,” U.S. Sen. Tammy Baldwin (D-Wis.) said moments before the start of the rally, which was organized by Citizen Action of Wisconsin.

Rallies in some other cities in support of the health law also were well-attended. Police estimated about 600 people showed up in Portland, Maine. Hundreds also attended events in Newark, N.J., Johnston, R.I., Richmond, Va., and Boston.

“We are not about trying to make America sick again,” U.S. Rep. Gwen Moore (D-Wis.) told the cheering crowd in Milwaukee. She emphasized that repealing the health care law would affect all Americans.

For more on these rallies, visit Milwaukee Journal Sentinel.