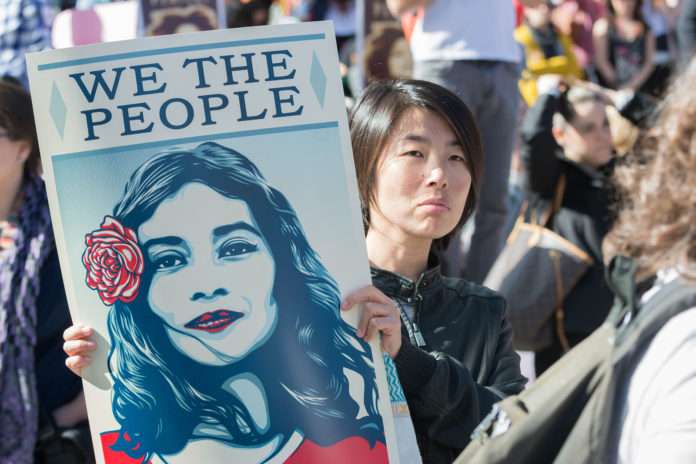 The day after Donald Trump was sworn in as president, millions of women across the country went to D.C. for the Women’s March on Washington.

Maria Hamilton, the mother of Dontre Hamilton who was killed by a Milwaukee police officer in 2014 went to Washington. Maria Hamilton is a part of “Mothers of the Movement,” women who have lost son’s due to police or civilian violence.

The Milwaukee Journal Sentinel reported that Hamilton, along with the mothers of Trayvon Martin, Jordan Davis and Eric Garner attended the Women’s March.

“The new president, like all those elected to public office, is responsible to represent the interests of all citizens of this country,” Hamilton said in a news release.

“He would do well to remember that we expect him to uphold this civic and moral obligation, to work to bridge the divisions widened over the course of the campaign, and to begin to create a government that works for all,” said said. “America can’t be ‘great’ until it is great for everyone.”

For those who couldn’t get to D.C., “sister marches” were held across the county, including Madison, near the state capital.

The protests in Madison brought an estimated 75,000 to 100,000 to the state Capitol to voice concerns over Donald Trump’s presidency.

As they marched up State Street to the Capitol for the Women’s March on Madison, women, men and children held signs in support of women’s reproductive rights, public education and the scientific consensus of global climate change, among other causes. The march was one of hundreds of “sister marches” around the world to coincide with the Women’s March on Washington.

While the vast majority of people at Madison’s march and rally at the Capitol expressed disapproval of Trump, Kristopher Gasch, 34, said he was not protesting against anything, but was demonstrating in support of equal rights and inclusiveness.

“It’s the diversity that makes this county great,” said Gasch, of Port Edwards. “We’re not going to be silent.”

Gasch held a sign that read: “God made us gay. Common sense made us march for women’s rights.”

Nomi Rivers, 54, of Madison, said she came to the march in support of many causes she fears will be ignored under the Republican majority in Washington, including women’s health, inequality and climate change.

“There seems to be a sort of icy tunnel vision on (the Republican) side, and I’m concerned that some of the issues that were important to people who weren’t supportive of (Trump) are going to be drowned out,” Rivers said.

As a biracial woman coming from a mostly white family, Rivers said she felt alone in her feelings after the election because her family did not feel the same pain that she did. She said the positive energy of the march and rally made her feel less alone and more hopeful for the future she wants for the country.

“It’s energizing,” Rivers said. “I’m hoping that other people who are saying, ‘Oh I can’t do anything’ realize that yeah, you can.”

Rivers, who has attended dozens of protests to voice political opinions and participate in the right of assembly guaranteed in the First Amendment, said she doesn’t believe that voting is the only way to influence politics.

“I do believe that the more we’re heard, the more we can raise our voices up, there are better chances that somebody in Congress is going to hear us and maybe won’t do that critical vote that’s going to be harmful,” Rivers said.

For more on the Women’s March, visit Madison.com