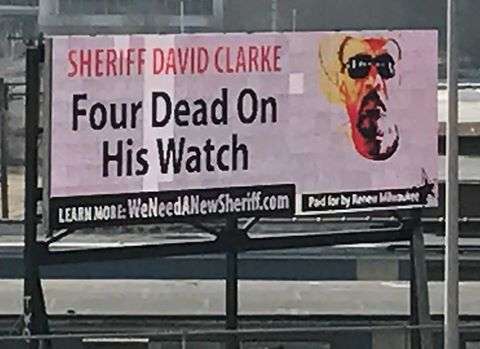 MILWAUKEE – Milwaukee County Sheriff David Clarke continues to face withering criticism for the extraordinary number of deaths in the jail he oversees, including four in about the last year. Those who died on his watch include a newborn baby and a man who died of thirst after being denied access to water.

Clarke has indicated he will not cooperate with investigations into his conduct, and so a Milwaukee group put up a billboard to draw attention to Clarke’s failings, which reads “Four Dead On His Watch” next to a picture of Clarke. The group, Renew Milwaukee, posted a picture of their billboard on Facebook.

Clarke is spending most of the week with the Republican President Donald Trump, Vice-President Mike Pence, Governor Scott Walker, Senator Ted Cruz, and many others at the Conservative Political Action Conference (CPAC), the annual gathering of right-wing conservatives.

Clarke has also come under criticism recently for threatening a citizen who disapproved of his support for the Dallas Cowboys, racist remarks on a national television program, earning a huge amount of money traveling around the country giving speeches to conservative groups, taking excessive days off, and a multitude of other sins. Most of his discretionary duties have been removed by a County Board and County Executive sick of his antics, and a Milwaukee Democratic legislator recently called for Clarke to be removed from office for his abuses of power.

“I call on Governor Walker to remove Sheriff Clarke for his willful neglect of duties, repeated inappropriate and incendiary comments, his promotions of violence, and use of intimidation against innocent civilians,” said Rep. David Crowley.

There’s also been much recent speculation that Clarke intends to run against incumbent U.S. Senator Tammy Baldwin, and a super-PAC supporting such a candidacy has raised over $1 million while also being criticized for inappropriate and offensive insults directed at the openly-lesbian Senator.