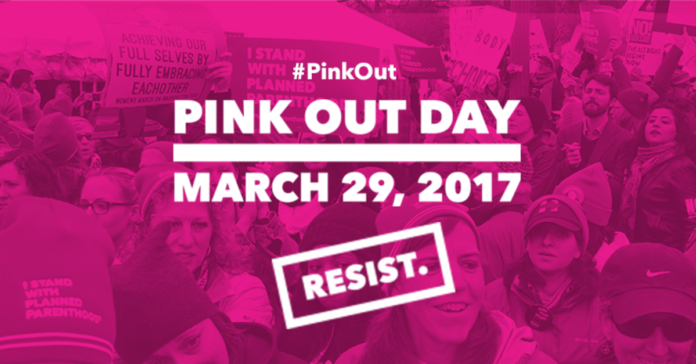 MADISON – Today, Planned Parenthood of Wisconsin supporters are joining with people across the country to show their defiance against the relentless attacks on Planned Parenthood by participating in Pink Out Day, a digital advocacy campaign. This action comes on the heels of a major health care victory, stopping the Affordable Care Act repeal bill, which included a provision block Planned Parenthood from receiving Medicaid reimbursements.

“Pink Out Day is a reminder that grassroots organizing and speaking out works,” said Nicole Safar, Government Relations Director of Planned Parenthood of Wisconsin. “The reason the ACA repeal bill was stopped was because people rallied and marched, showed up at town hall meetings, flooded the Congressional switchboard with calls and organized online.”
Over the last several months, Planned Parenthood of Wisconsin joined our partners for the Women’s March on Madison, saw doctors tell Speaker Ryan why they stand with Planned Parenthood, showed our state level elected officials that we won’t go back on women’s health, rallied with Cecile Richards, stood proudly with the City of Milwaukee, and traveled to Washington, D.C. to meet with lawmakers and make our voices heard.
“Because of our supporters and patients speaking out about the essential health care Planned Parenthood provides, efforts to block funding are extremely unpopular,” said Safar.
The majority of Americans oppose “defunding” Planned Parenthood, as shown by multiple polls:

“We know that this is just the beginning. Politicians will not stop attacking women’s health, but Pink Out Day is a reminder that each time they try, we will be back in full force. Planned Parenthood will never stop fighting for the 60,000 Wisconsinites who rely on us for care each year,” said Safar.