MILWAUKEE- After a sheriff’s deputy shot and killed Terry Williams on June 11th, community leaders and lawmakers have been asking the Milwaukee County Sheriff’s Office to release its policy on chasing vehicles. Though experts say that shooting at a moving vehicle is dangerous, the policy in place at the sheriff’s office is vague at best.

Milwaukee County sheriff’s deputies have wide discretion when it comes to chasing vehicles, a review of the agency’s policies show.

Calls from local lawmakers to release the policy came after a deputy, who was on foot, fired into an Audi SUV fleeing a deputy squad car trying to pull it over for a traffic violation near Bradford Beach. The gunfire killed Terry Williams, the driver of the SUV, and wounded passenger Paula McEwen.

The agency’s policies on pursuits and use of force do not explicitly address if deputies should shoot into a moving vehicle. Experts have said shooting into a moving vehicle carries great risk, and there are few scenarios where law enforcement officers would be justified to do so.

The Sheriff’s Office allows deputies to chase for criminal or traffic offenses when the “necessity of immediate apprehension outweighs the level of danger created by the pursuit,” according to the policy.

“The ultimate responsibility is to protect the public,” the policy says.

Deputies are instructed to consider the risk to the public, time of day, road, weather and environmental conditions, as well as pedestrian traffic and population density. The lakefront was crowded with pedestrians and drivers on the Sunday evening when Williams fled and the deputy chased. 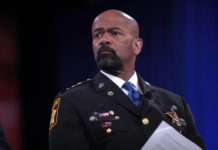