WI 7th CONGRESSIONAL DISTRICT- Sean Duffy, Congressman from Wisconsin’s 7th Congressional District, went on record recently with a dubious claim about the Affordable Care Act’s insurance exchanges. During an interview on EWTN on July 20, 2017, Duffy stated an oft-repeated Republican talking point. Duffy said that “You have almost half the counties in America that have one provider or no provider for insurance.” Politifact Wisconsin rated this statement “Mostly False.”

One of Ryan’s fellow Wisconsin Republicans, U.S. Rep. Sean Duffy, made that claim July 20, 2017, in a television interview on EWTN, a Catholic network.

“We let Democrats off the hook,” Duffy said. “They gave us a failing health care package. You have almost half the counties in America that have one provider or no provider for insurance. This law is crumbling.”

To back Duffy’s statement, his office cited a June 2017 analysis by the New York Times. It estimated that 1,433 counties — or about 45 percent of all counties — are expected to have one insurer or no insurers in the Obamacare marketplaces, unless another carrier steps in. The marketplaces are where 12 million people buy their own coverage.

The Times said it used Kaiser data showing which companies currently offer plans in each county, and combined that with announcements from insurance companies saying which counties they plan to exit or enter in 2018.

Currently, according to the article and Kaiser data, 1,036 counties have one provider.

That’s 33 percent of all counties.

There aren’t any counties right now that have no insurers on the exchanges.

Duffy said: “You have almost half the counties in America that have one provider or no provider for insurance” on the Obamacare exchanges.

Currently, 33 percent of counties have only one company selling health insurance policies to individuals on the Obamacare exchanges. There are no counties that have no providers.

The element of truth in Duffy’s claim is that the New York Times estimates that in 2018, 45 percent of counties will have one provider or no providers. But that’s a projection and the article notes that the current figure is 33 percent. 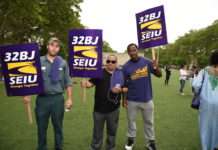